There is not a room or spot in the Vilina Vlas hotel where women were not raped or people were not killed, according to Bakira Hasecic, president of Bosnia’s Women Victims of War (WVW) association and a rape survivor from Visegrad.

It is estimated that Serb forces captured and raped at least 200 women and girls, mostly Bosniaks (Bosnian Muslims), in 1992 in the hotel in Visegrad, eastern Bosnia.

Some of the victims were as young as 14. Fewer than 10 made it out alive.

Their husbands, brothers and sons were also tortured and killed in the hotel.

Over the years, the few survivors have testified to media about what took place there.

One survivor, who wished to remain anonymous, told Balkan Insight how Bosnian Serb strongman Milan Lukic, head of the Serb paramilitary White Eagles – also known as Avengers – raped her at her home in Visegrad after killing her 16-year-old son in front of her with a knife.

Lukic then took the woman to Vilina Vlas, where she lost count of how many times she was raped.

She said: “There were many women held in the hotel and there was blood everywhere”.

“All the rooms in the hotel were locked. Every day they threw us bread which we had to catch with our teeth as our hands were tied. The only time they untied us is when they raped us,” she said.

Yet, the hotel has been promoted this summer as a tourist attraction by Republika Srpska, Bosnia’s semi-autonomous Serb-run entity created under the Dayton Peace Agreement that ended the country’s bloody conflict in early 90s – and also promoted by Visegrad municipality’s tourism organisation as part of an overall campaign.

The campaign, with its disquieting slogan, “We’re waiting for you in Visegrad”, distributed gift vouchers to attract visitors to the town. Vilina Vlas is among the participating hotels.

The Republika Srpska tourism website advertises the rehabilitation centre as an “aerial spa” due to its “altitude and natural environment” and boasts of its thermal waters.

Under the same tourism campaign, Visegrad municipality has been promoting its Andricgrad (Andric city), a mini-town theme park, which is financially supported in part by the Serbian government. 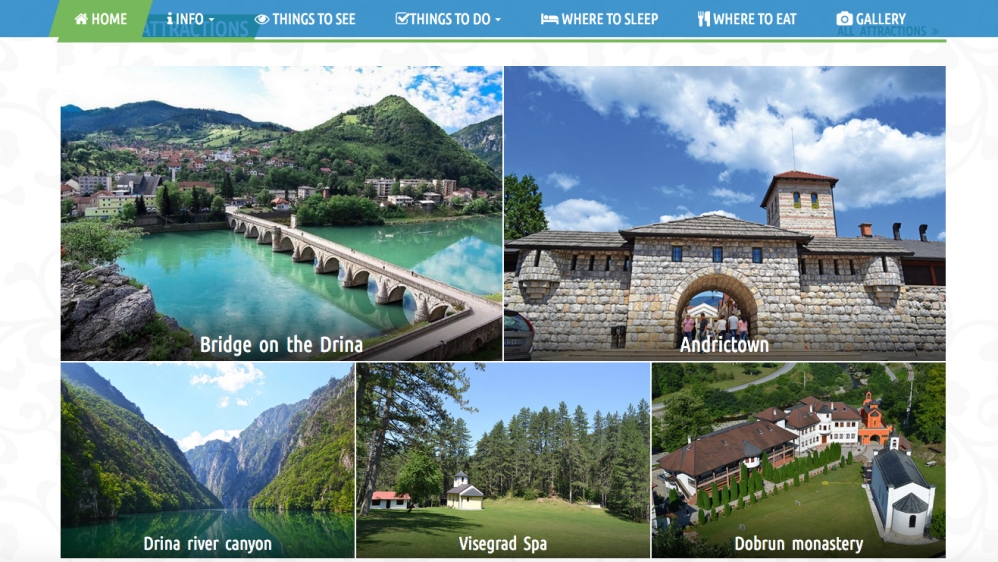 A screenshot shows sites promoted on the website of Visegrad’s tourist organisation including the Visegrad Spa, formerly used as a rape camp [Al Jazeera]

Part of the Andricgrad complex was built at the site of a former sports centre, which Serb forces had used as a detention camp for Bosniak civilians in 1992.

There is no mention of the war crimes that took place at Vilina Vlas or elsewhere in town, an example of the denial that can be common among Serbs in Republika Srpska, including its political elite.

But the hotel also remains listed on many international booking sites, including Trip Advisor, with photos showing a spa nestled in the forest, with no mention that the hotel was used as a rape camp and killing site. 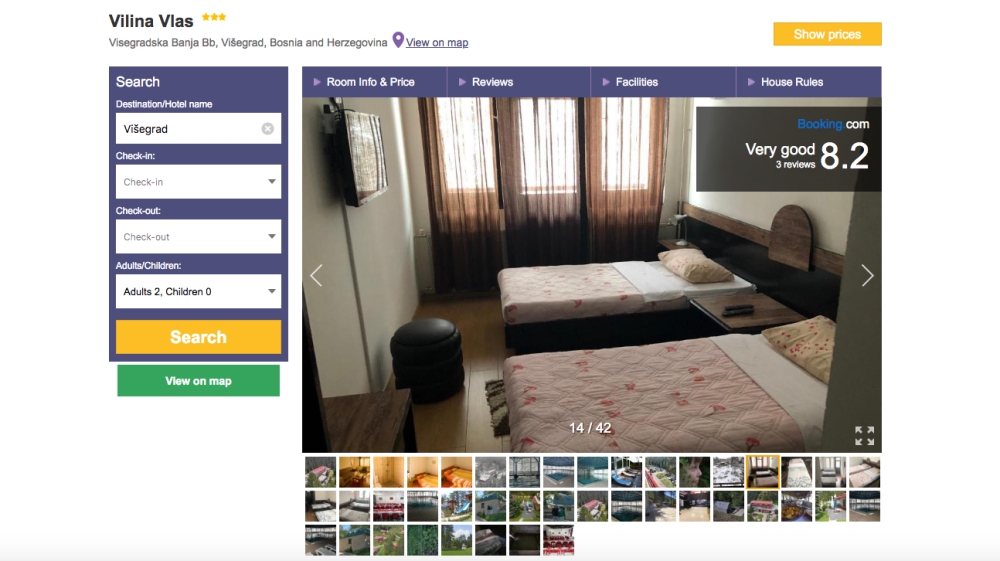 Vilina Vlas used as a rape camp by Serb forces is scored as ‘Very good’ on Booking.com [Al Jazeera]

As soon as it became apparent that Republika Srpska authorities were promoting Vilina Vlas as a tourist spot, an online petition was launched, calling on Google to remove the hotel as a tourist site from Google search and Google Maps. The petition has so far gathered 25,000 signatures.

“Dear Google, if somebody decided to turn Auschwitz-Birkenau concentration camps into a wellness retreat perfect for a ‘relaxing weekend getaway’, would you let them promote this on Google? Would you allow it to appear on Google maps as a tourist facility?” the petition launched by Bosnian Amela Trokic read.

“Since the Bosnian war in the 1990s not much has changed in the hotel and guests can choose to sleep in one of the many rooms or 160 available beds; the same rooms and beds where women were raped and men were tortured, beaten and killed as the furniture remains the same.

“Though we cannot stop mentally deranged people from knowingly visiting and staying at this disgusting building, we can stop the active promotion of it,” the petition read.

Google did not respond to Al Jazeera’s request for comment.

Trokic told Al Jazeera that a friend of hers had contacted Trip Advisor last month, informing them why the hotel should be removed from its listings, but the booking website responded saying it was not “in the position to provide comments regarding the past histories of the property in question” and as such, would “not remove accommodation listings if they are still operational”.

Many foreign tourists have stayed at the hotel, oblivious to the torture that took place at the site, including Australian actress Kym Vercoe in 2008.

‘Where women were raped’

WVW President Bakira Hasecic told Al Jazeera that the Serb paramilitaries that committed brutal mass rape of women and girls for four months in the hotel in 1992, where the victims were also killed. Five of the victims took their own lives.

One of them, 24-year-old Jasmina Ahmetspahic, took her own life by jumping from the third floor of the hotel after being tortured and raped repeatedly.

“All guests who stay in the rooms in Vilina Vlas – if they didn’t know, they know now … They’re sleeping in beds where women were raped and swimming in a pool where people were killed,” Hasecic said.

“Authorities of Visegrad, Republika Srpska don’t want to talk about the topic of torture in the hotel and hotel staff don’t want to tell guests the truth of what happened in these rooms.”

Hasecic also said that a memorial should be added to the site and the street that leads to the hotel should be renamed to honour Jasmina Ahmetspahic.

Hikmet Karcic, author and genocide researcher, told Al Jazeera that sites where mass atrocities took place, such as Vilina Vlas, have been “hijacked by the Republika Srpska authorities and normalised for everyday use”.

Edina Becirevic, genocide scholar at the University of Sarajevo, told Al Jazeera that what happened at Vilina Vlas was one of the examples of the “rape as genocide” that took place during the war, and part of the pattern of ethnic cleansing against Bosniaks that was carried out throughout the country for almost four years.

“Genocide denial is pervasive in the Bosnian and Herzegovinian entity Republika Srpska and promoting Vilina Vlas as [a] touristic attraction with financial support by the Serbian government additionally confirms their complicity in genocide in Bosnia” during and after the war, Becirevic said.

Serb forces had killed so many Bosniaks in the summer of 1992, that their bodies which were thrown into the Drina river sometimes clogged a hydropower plant in a border town in Serbia.

It prompted the director to write to the Visegrad police inspector, requesting that “whoever was responsible please slow the flow of corpses down the Drina”, The Guardian reported at the time.

In 2009, the ICTY sentenced Lukic to life in prison, convicting him of war crimes including murder, cruelty, persecution and other crimes against humanity committed from 1992 to 1994.

Hasecic said it is “incomprehensible that following such horrible crimes, authorities have the bravery to offer rooms to guests”.

“For us victims who survived, Vilina Vlas hotel was and will remain a hotel with a dark past and we will not give up,” Hasecic said. “We will always speak the truth about what happened and fight for truth and justice to win.”

German FM: ‘Spark could lead to disaster’ in east Mediterranean

Trump’s far-right legacy will remain regardless of the election

Africa: No Country Is an Island -19 Vaccines Is the Only Way…

Congo-Kinshasa: Why Rangers in the Congo’s Virunga…