Protests erupted across the United States on Thursday night as anger over the death of George Floyd, an unarmed black man, intensified.

Floyd died on Monday after a white police officer used his knee to pin Floyd’s neck to the ground for several minutes in Minneapolis, Minnesota.

A video of the incident shows Floyd pleading with officers, saying “I can’t breathe” before going motionless with the officer’s knee still on his neck.

The four officers involved were swiftly fired, but Floyd’s family, community leaders and residents are calling for arrests to be made.

“They need to be convicted and get the death penalty,” Philonese Floyd said.

Hundreds of protesters marched in downtown Minneapolis for a third night on Thursday, demanding justice and an end to police violence.

Video shared on social media showed protesters stopping their march at one point, kneeling and raising a fist in a moment of silence.

Moment of silence for #GeorgeFloyd pic.twitter.com/UDt9XthWK4

Earlier on Thursday, a small group of protesters “occupied” the space outside the home of Hennepin County Attorney Mike Freeman, who will handle the case, to demand criminal charges for the four officers involved.

“We aren’t going anywhere until Mike Freeman prosecutes and charges the officers,” protesters said in a Facebook Live video, with at least one tent put up on the sidewalk outside the county attorney’s home. 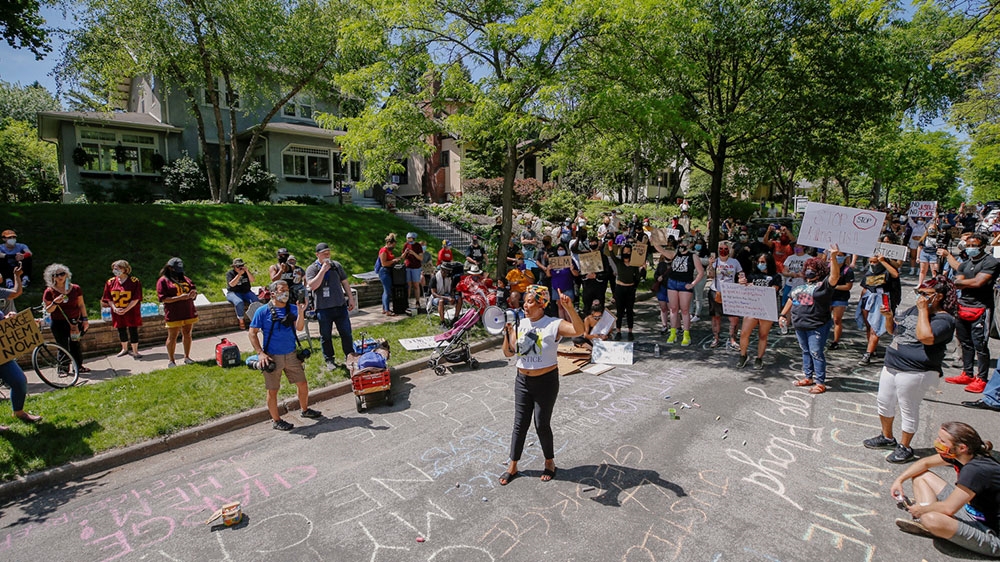 Freeman’s office said in a statement on Tuesday that it was was “shocked and saddened by what appeared in a recent video”.

It said it would make a decision on prosecution after it receives the completed findings of the investigations by the Minnesota Bureau of Criminal Apprehension and FBI.

Freeman said on Thursday that his office would work through the case “as expeditiously, as thoroughly as justice demands”.

“We just can’t rush this,” Freeman said. “These need to be done right. Please give me and give me the United States attorney time to do this right and we will bring you justice.”

The officers involved have been identified as as Derek Chauvin, Thomas Lane, Tou Thao and J Alexander Kueng. 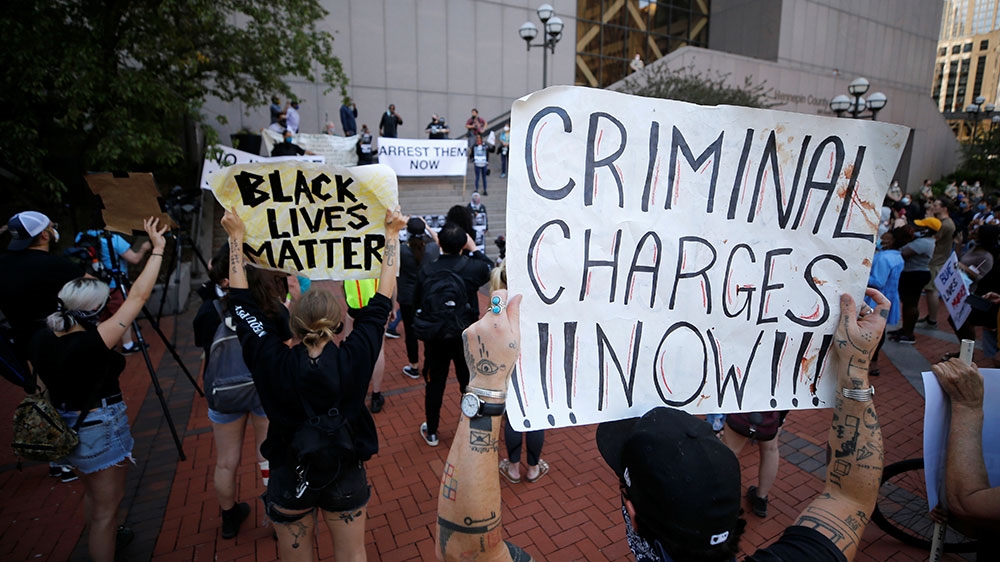 ‘No justice, no peace’

Hundreds protested Tuesday and Wednesday night, chanting “I can’t breathe” and “no justice, no peace”.

Floyd’s death has been compared that of Eric Garner, an unarmed black man who died in 2014 after police put him in a chokehold. Some of Garner’s last words were “I can’t breathe”.

While the protests have initially and largely been peaceful, they have descended into chaos with reports of looting, arson and vandalism.

Police have used tear gas and non-lethal projectiles to disperse the crowds.

“We want to work together to ensure that people have their voices heard in a safe manner,” she said during a news conference alongside Mayor Jacob Frey. 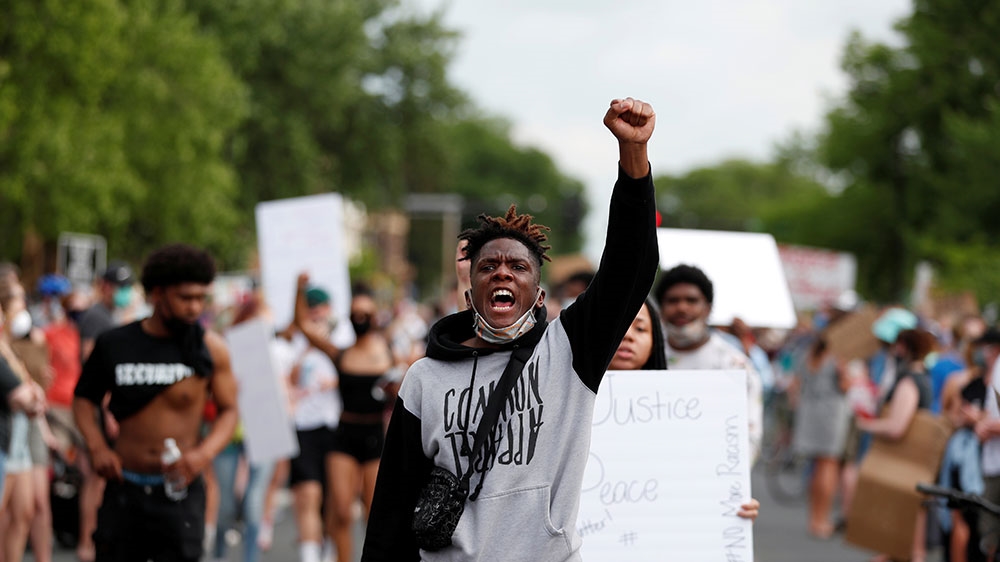 Protesters gather at the scene where George Floyd, an unarmed black man, was pinned down by a police officer kneeling on his neck before later dying in hospital in Minneapolis, Minnesota, the US [Eric Miller/Reuters]

For his part, Frey, who has called for the arrest of the officer who pinned Floyd down, said the city’s anger is “not only understandable, it’s right”.

“‘What we’ve seen over the last two days and the emotion-ridden conflict over the last night is the result of so much built-up anger and sadness … that has been ingrained in our black community – not just because of the five minutes of horror, but for 400 years,” he said.

Minnesota Governor Tim Walz called in the US National Guard on Thursday to support local authorities as they braced for the night’s demonstrations.

Protests also took place in cities across the US, including New York City, Columbus, Ohio and Oakland, California, on Thursday.

Dozens of people were reportedly arrested during the New York City protest.

In Denver, Colorado, hundreds of people descended on the state capitol to protest against police brutality. Police confirmed that shots were fired near the area where the protest was taking place. It is unclear if the shots were related to the protest. Police said there were no immediate reports of injuries.

Several more protests are scheduled for Friday and over the weekend.

‘Your violence has brought this resistance’

Several prominent activists and sports stars meanwhile have expressed outrage over Floyd’s death and support for those protesting.

Rights activist and former National Football League player Colin Kaepernick, who took a knee during the national anthem at US football games to protest police brutality, tweeted that “we have to fight back!”

When civility leads to death, revolting is the only logical reaction.

The cries for peace will rain down, and when they do, they will land on deaf ears, because your violence has brought this resistance.

We have the right to fight back!

“When civility leads to death, revolting is the only logical reaction,” Kaepernick said in support of the protesters. “The cries for peace will rain down, and when they do, they will land on deaf ears, because your violence has brought this resistance.” 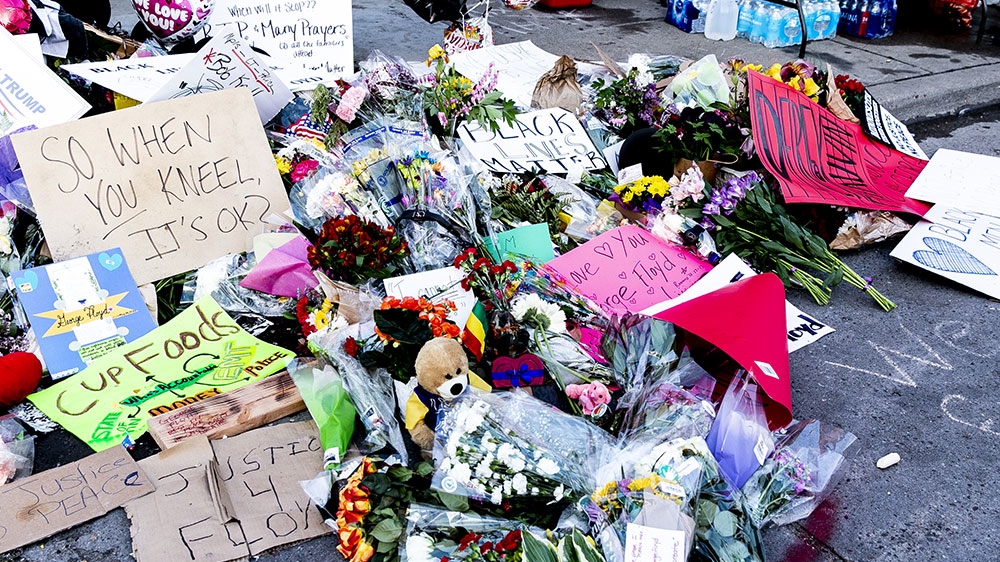 The memorial of George Floyd is seen during the second day of protests in Minneapolis, Minnesota [Jordan Strowder/Anadolu Agency/Getty Images]

In a joint statement on Thursday, US Attorney Erica MacDonald And FBI Special Agent In Charge Rainer Drolshagen said that the US Department of Justice has made the investigation into Floyd’s death a “top priority”.

“The federal investigation will determine whether the actions by the involved former Minneapolis Police Department officers violated federal law,” the statement read.

US President Donald Trump, who in the past has been accused of stoking racial tensions, on Thursday said he and his administration are “very much involved”.

He said the video of Floyd’s arrest was a “very shocking sight”, but he declined to say whether he believed the officers should be charged.

This Ferocious Water Flea Is Mauling The Great Lakes

Alaska islands may be part of single, massive volcano…

Ethiopia: ‘The Unfolding Conflict in Ethiopia’