Belarusian President Alexander Lukashenko says his Russian counterpart, Vladimir Putin, has agreed to help to “ensure the security” of the country if needed as thousands of people continue to hold peaceful protests against his rule.

Lukashenko made the comments on Saturday evening, several hours after a phone call with Putin, the first publicly known direct contact between the two leaders since he claimed a landslide victory in an election his opponents said was rigged.

Facing the biggest challenge to his rule since taking power in 1994, Lukashenko called in Moscow’s help after warning there was “a threat not only to Belarus”.

“To talk about the military element, we have an agreement with Russia as part of the union state and the Collective Security Treaty Organization (CSTO). Such situations fall under that agreement,” Lukashenko told defence chiefs according to by Belta state news agency.

“I had a long, substantial conversation today with the Russian president … We agreed that at our very first request, comprehensive help will be given to ensure the security of Belarus.”

Belarus and Russia have formed a “union state” linking their economies and militaries, while the CSTO is a military alliance between six ex-Soviet states.

Protesters have been demanding that Lukashenko resign, saying the official results of the August 9 presidential election that gave him a sixth term in office are fraudulent.

On Saturday, thousands of demonstrators gathered at the spot in the capital, Minsk, where a protester died. Some stripped off their shirts to display deep bruises they said came from being beaten by police.

Despite harsh police crackdowns against the protesters, including the detention of some 7,000 people, the demonstrations have swelled into the largest and most sustained anti-government movement since Lukashenko took power 26 years ago.

‘We don’t need any foreign government’

The 65-year-old Lukashenko, for his part, on Saturday rejected suggestions that foreign mediators become involved in trying to resolve the country’s political crisis.

“Listen – we have a normal country, founded on a constitution. We don’t need any foreign government, any sort of mediators,” Lukashenko said.

He appeared to be referring to an offer from the leaders of Poland, Lithuania, Latvia and Estonia to become involved.

Meanwhile, a Kremlin statement said Putin and Lukashenko both expressed hope for a quick resolution to the tensions.

“It is important that these problems are not used by destructive forces aimed at causing injury to the cooperation of the two countries in the framework of the union state,” the Kremlin said.

Ties between the two traditional allies had been under strain before the election, as Russia scaled back the subsidies that propped up Lukashenko’s government. Russia sees Belarus as a strategic buffer against NATO and the European Union.

A statement by Kremlin made no mention of the assistance mentioned by Lukashenko but said both sides expressed hope for a quick resolution to the tensions.

Statements by both sides contained a pointed reference to a “union state” between the two countries. The neighbours had signed an agreement in the late 1990s which was supposed to create a unified state. The unification project was never properly implemented, and more recently, Lukashenko had rejected calls by Moscow for closer economic and political ties as an assault on his country’s sovereignty. 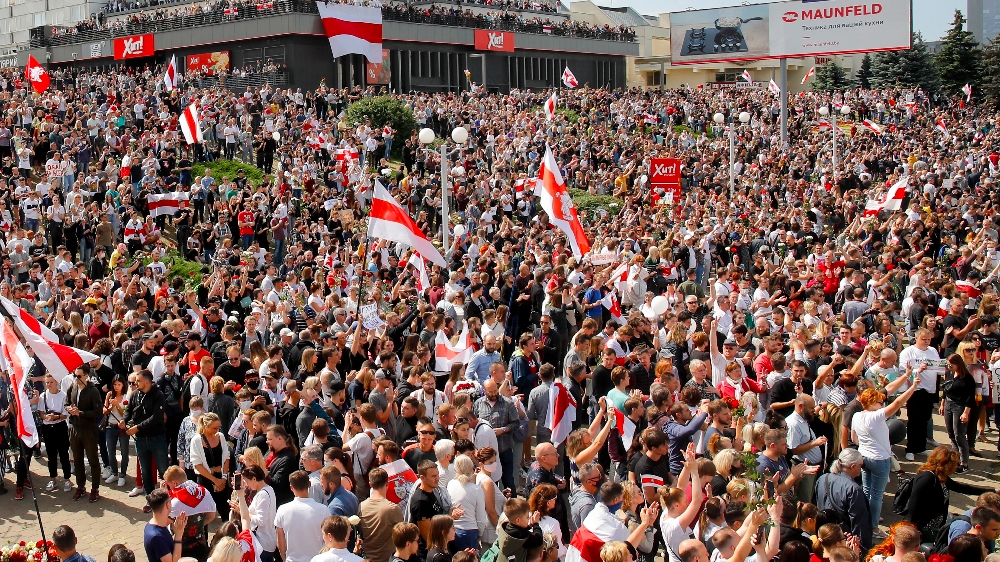 People gather at the place where Alexander Taraikovsky died amid clashes protesting the election results, during his civil funeral in Minsk, Belarus [Dmitri Lovetsky/AP]

Meanwhile, a funeral was held on Saturday for Alexander Taraikovsky, a 34-year-old protester who died on Monday in Minsk under disputed circumstances.

Belarusian police said he died when an explosive device he intended to throw at police blew up in his hand. But his partner, Elena German, told The Associated Press news agency that when she saw his body in a morgue on Friday, his hands showed no damage and he had a perforation in his chest that she believes is a bullet wound.

Some 5,000 demonstrators gathered in the area where Taraikovsky died. They laid a mass of flowers in tribute, piling into a mound about 1.5 metres (five feet) tall, as passing cars blared their horns.

Al Jazeera’s Step Vaessen, reporting from the gathering in Minsk, said people had been streaming in to visit the shrine, in memory of Taraikovsky but also as a sign of protest and defiance.

She added that no police or security forces had been seen in the area in the last 48 hours.

“On Friday, when people were marching towards the Independence Square, there was some military in front of the government house, but they lowered their shields, which led to remarkable scenes with women hugging them.

“There was some riot police standing by. There were also reports about military trucks moving into the city, but so far, they haven’t shown themselves.”

The brutal suppression of post-election protests in Belarus has drawn harsh criticism by Western countries and the United Nations. European Union foreign ministers said on Friday that they rejected the election results in Belarus and began drawing up a list of officials in Belarus who could face sanctions for their role in the crackdown.

US Secretary of State Mike Pompeo said on Saturday that he was glad to see that some protesters in Belarus had been freed but that it was not enough. He also said the presidential election in Belarus fell short of democratic standards.

Opposition presidential candidate Svetlana Tikhanovskaya, who fled to neighbouring Lithuania on Tuesday, has called for more protests and an election recount. Her campaign announced she was starting to form a national council to facilitate the transfer of power.

Lukashenko has accused the demonstrators of being in cahoots with foreign backers aiming to topple his government and compared them to criminal gangs.